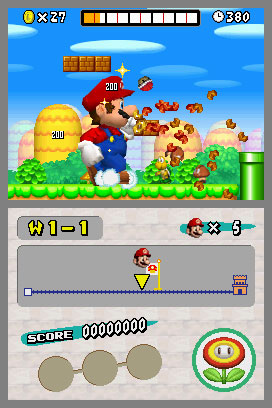 For years one of me and my gaming friend’s fantasies was for Nintendo to make a new Super Mario Bros. sequel with up to date graphics, but traditional 2-D gameplay. This was at a time when 2-D gaming seemed extinct beyond the portable systems of the time, which couldn’t handle 3-D gaming.

Never would we have thought back then that such a Mario game would actually some day be released by Nintendo, and that it would literally be called New Super Mario Bros.

It seemed more like a demonstration that every DS game didn’t need to extensively use both screens than actual software intended for retail, and surely Nintendo wouldn’t actually market a game simply called “New Super Mario Bros.” would they?

Come E3 2006, Nintendo is hyping New Super Mario Bros. as the next DS killer app, and the perfect title to break in the newly released Nintendo DS Lite with its sexy new design and bright, beautiful screens.

I picked up a Nintendo DS Lite the night it came out in America at the Nintendo World store in Manhattan along with a copy of New Super Mario Bros. The game I had literally dreamed of for so years was finally a reality.

The first thing that struck me was how odd it was to see “Small Mario” in the context of a modern Mario game. Before New Super Mario Bros., the “Mario -> Super Mario” mechanic with Mario growing after eating a Super Mushroom hadn’t been in a game since 1991’s Super Mario World.

I was immediately dismayed at the presence of Bowser Ju. as Peach’s kidnapper and numerous appearances as a miniboss. Where are the Koopalings, the iconic world bosses who had appeared in the two previous Super Mario Bros. games on the NES and Super NES?

According to interviews with the creators of New Super Mario Bros. they included Bowser Ju. as a nemesis instead of the Koopalings to keep continuity with Super Mario Sunshine. Bowser Ju. was introduced out of left field in Mario’s Gamecube adventure as though he was already an established character, and his very existence always perplexed me.

I also hated the Mega Mushroom from the first time I used it in the first stage. I wanted to take my time and enjoy playing through the first level of the first Super Mario Bros. game since 1991, not stomp through it in a matter of moments as a giant. Furthermore, the Mega Mushroom is completely useless in many levels anyway due to solid obstacles that can’t be broken through. 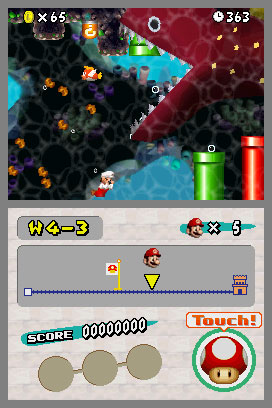 It would have been a cool item to have in your inventory for use during certain parts of the level, but you can only hold one item in reserve at a time anyway, its not like in Super Mario Bros. 3 where you can actually keep a number of items for convenient use. Even early screenshots of New Super Mario Bros. showed multiple items being stored on the touch screen.

The Mega Mushrooms are only offered at certain points in the game which can’t be repeated, so all the time you have your Mega Mushroom on the touch screen menu, you can’t store any extra Super Mushrooms or Fire Flowers, and who wants to run through a difficult level risking their lives as Small Mario just because they want to save or can’t use their Mega Mushroom in that stage without wasting it?

It was nice to see that some of the moves Mario picked up in his move to 3-D were now available to him in New Super Mario Bros., specifically his triple jump and wall jumps. However, I missed the “weight” and feeling of total control of Mario that was key to the GameBoy Advance game Mario Vs. Donkey Kong. Mario had so many moves in that game it almost felt like a fighting game, and I missed that, though I do admit that number of moves was not at all needed in this game.

I was surprised by how generous the game was being with 1-up Mushrooms in those bonus houses on the map screen. In fact I deliberately passed them over. Why should I need 40+ extra lives in the first World when I have yet to even die once completing a stage yet? It’s a good way to offer assistance to younger or novice players, and I very gladly passed it up until I actually found I needed the lives.

As an advocate of always being able to save nearly anywhere in a portable game such as a DS title, I actually didn’t mind that they went back to the old “play till you completed a fortress or castle” model of Super Mario World. It also let you save whenever you unlocked a bonus house by paying with coins, which I never took note of till after beating the game, but this gave players extra incentive to find coins so they could save when they needed to by unlocking a bonus house.

Being able to put the DS to sleep at well by closing the lid also offset the inability to save at will during the course of my average, busy days at school.

As for the “main theme” that plays during the first stage and many of the other outdoor levels, I at first wasn’t impressed. My favorite Super Mario main themes were those of Super Mario Bros. 1 and 2, Super Mario World, and the BobOmb Battlefield theme of Super Mario 64.

Having waited for years for a new Mario melody that win my heart from the very first note, New Super Mario Bros.’ theme was not it. The theme took a while to grow on me. Its pace and mood seems much slower and calmer and “beat” oriented than Super Mario Bros. 2. or Super Mario World’s which were more melodious, though it is just as cheerful. 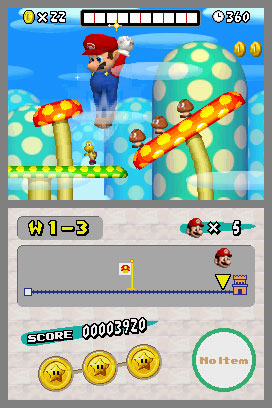 Like Super Mario World’s theme, the New Super Mario Bros. main theme is remixed into  the game’s “athletic” theme which is played in levels with lots of fast paced running and jumping.

My primary complaint about New Super Mario Bros. is its version of “hidden worlds”.

Hidden stages were accidentally introduced into the Mario platforms with the glitch “World  -1” in the first Super Mario Bros. in addition to many well hidden warp zones and secret areas in stages that were added intentionally.

The Japanese version of Super Mario Bros. 2. added an entire secret world and other extra bonus levels to be discovered. Super Mario World’s dozens of secret exits in addition to a secret world brought the expectation for challenge and exploration in Mario platformers to the next level, and this was carried on into Super Mario 64.

So, for New Super Mario Bros. to simply gray out World 4 and World 7 on the world select screen and act as though they were “secret worlds” was disappointing and in my opinion a lazy move by Nintendo.

Additionally, in terms of difficulty, I don’t feel like I’ve skipped an entire section of the game in terms of difficulty between World 3 and World 5. Imagine if on your first session of Super Mario Bros. 1, 2, 3, or Lost Levels, you skipped from World 2 to World 4. That’s a considerable leap in difficulty, yet in New Super Mario Bros. I wouldn’t have even noticed I had skipped a world had the levels not been numbered.

This shows that the game probably has in pacing issues and the difficulty increase should have been greater from world to world.

And once Worlds 3 and Worlds 7 are unlocked, there isn’t anything outstanding about them, they seem like standard issue levels intended to be played in the order they were numbered. I’m guessing they were pressed for time and wanted to have “secret worlds” of some sort, so they took a pair of ordinary worlds that they felt were non-essential and made them unlockable.
Disappointing. 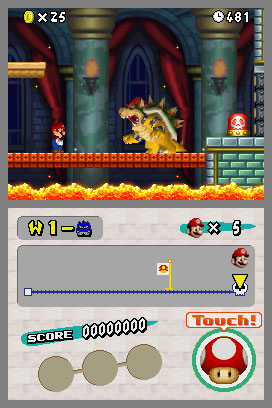 One thing that struck me as surprising was facing Bowser at the end of World 1. I wasn’t expecting to fight him till the end of the game. After dropping him into the lava as I had so many times in Super Mario Bros., the very last thing I expected was for doing this to actually “kill” Bowser, reducing him to a bleached skeleton before even setting foot into World 2. I actually had one of those “Daaamn! 8O” takes akin to the Angry Video Game Nerd the first time I saw this.

Part of the nostalgia of video games to me is not just playing them, but the context of what was going on in my life at the time I was first playing them. This is especially true of portable games which can be played in all sorts of settings in and out of the home.

New Super Mario Bros. was a game I had dreamed of long before there was any reason to hope it would actually come into being, and it came at an exciting, transformative time in my life. Though this game is far from my favorite Super Mario platformer and not something I’d often replay, I will always think fondly of it and would recommend it to any Mario or platforming fan.