I've been fortunate enough to obtain a number of unique Nintendo handhels systems, some of which were signed by key Nintendo figures, and another which serves as a one-of-a-kind momento of an important day in Nintendo History.

Many limited edition Nintendo handhelds have been released over the years, but this rare gem is the only system I know of made to commemorate a single day in Nintendo history.

May 5, 2006 was the day that Nintendo first revealed the Wii to the public for the first time at their E3 Media Briefing. After Nintendo 64 and Nintendo Gamecube failed to achieve the marketshare dominance that Nintendo enjoyed in the 80's and early 90's, many gamers and industry pundits began to question if Nintendo could remain relevant the upcoming console generation. The Media Briefing held on May 5th 2006 was the beginning of an upturn in the lackluster public image that had haunted Nintendo since the launch of Gamecube, and showed the world that they were ready to reclaim market dominance in an age when many expected them to go the way of Sega.

At a VIP party held at the Nintendo World store in New York City after the Media Briefing, 50 attendees were given the opportunity to hand over their Nintendo DS systems so that a custom engraving could be placed on their systems to commemorate the Media Briefing. No one knew beforehand that this special engraving was being offered, therefore, attendees only had their used and worn in Nintendo DS systems which they had already used and abused to hand in.

Attendees lamented that they didn't have the opportunity to run out to the store and buy a new DS from a nearby store to have engraved, because attendees were not allowed to re-enter the party once they had left the door.

A few days after the Media Briefing, I got a call from Nintendo World saying that they accidentally destroyed my Nintendo DS with the engraving machine and replaced it with a brand new unit.

Far from disappointed, I was thrilled, because at that point I realized that I would now have one of the few (if not only) mint condition examples of the E3 2006 Nintendo DS, and furthermore, since the DS I had given them was the very uncommon graphite black Nintendo DS imported from Japan, I almost certainly had the only example of this system in graphite black.

Since only 50 of the attendee's systems were engraved, it's very likely that I have the only mint condition example of the E3 2006 DS in Graphite, or even the only Graphite or mint example of this system whatsoever. These systems were never offered for sale at retail.

Obviously I never played this system. I never even took the stylus pen to the touch screen.

So, behold, a possibly one of a kind mint condition example of one of the rarest Nintendo DS systems in existence! 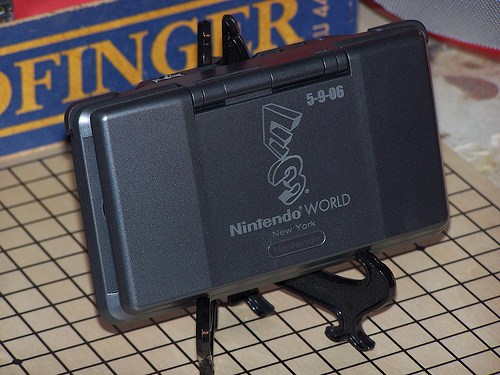 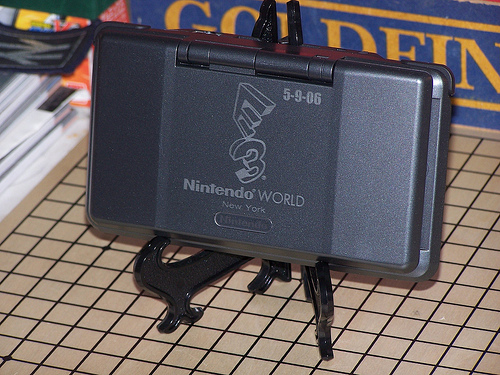 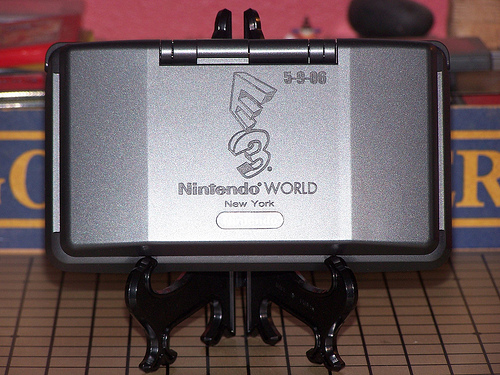 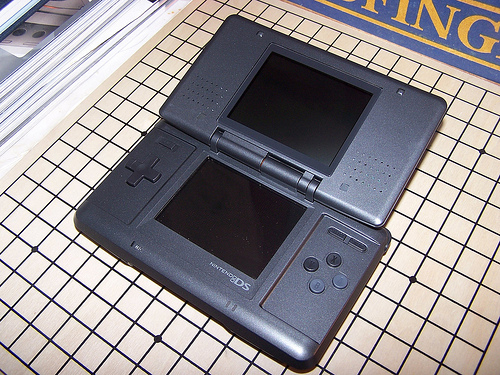 If you don't know, Miyamoto is the creator of Super Mario, The Legend of Zelda, Donkey Kong, Pikmin, and numerous other Nintendo classics.

By a coincidence of fate, I ended up on the overnight line in front of Nintendo World to meet him. This story alone is worthy of an entire site feature, or perhaps even a full length memoir, either of which I will write at a later date.

Despite leaving my house with the possibility of meeting Miyamoto in mind, I deliberately didn't bring anything for him to autograph.

As the time I thought "Everyone is going to be asking him to sign things, I don't want to bother him with an autograph, just seeing him will be enough.".

When it later became clear that the main "point" of the event was for him to sign things, I thought I might as well give him the Nintendo DS system I brought the day the system launched nearly a year earlier to autograph. My mom, who was also with me, presented him with the box from my then newly purchased GameBoy Micro to sign. If not for me wanting to buy the GameBoy Micro the previous day, I quite likely would have never had the chance to meet Miyamoto.

The picture of me shaking hands with Shigeru Miyamoto was distributed in Nintendo's official press kit for the event. 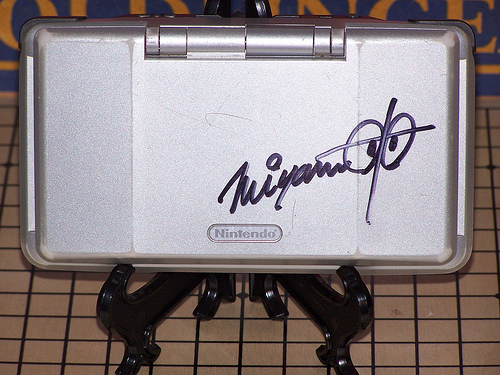 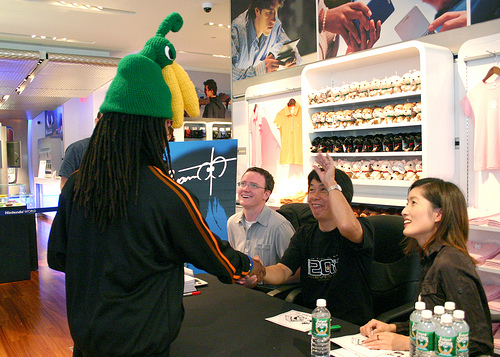 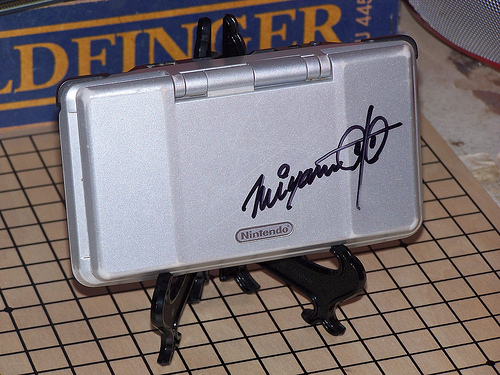 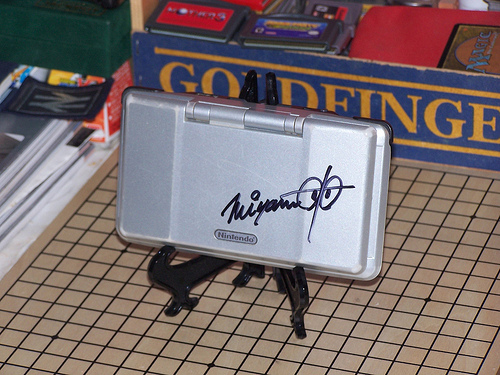 I never used this Nintendo DS for gaming again, and replaced it with black Nintendo DS imported from Japan, which was later transformed into my E3 2006 Nintendo DS.


With these cheesy yet highly effective opening words at Nintendo's E3 2004 Media Briefing, the gaming world got its first taste of Reggie Fils-Amie, the new VP of Sales and Marketing of Nintendo of America, who sent a strong message that Nintendo was still relevant at a time in which many gaming pundits predicted a Sega-like collapse for Nintendo.  E3 2004 launched an era fans dubbed the "Reggielution", in which Nintendo turned out a unexpected success with the Nintendo DS (predicted by numerous "experts" to be a short lived VirtualBoy like disaster) and prepared themselves to regain market dominance with the Wii in the then upcoming home console generation.

Due to a stroke of dumb luck, I ended up in a unique face-to-face opportunity with Reggie Fils-Amie only seconds after getting my Nintendo DS signed by Shigeru Miyamoto.

He signed my GameBoy Micro faceplates, and told me that the flame colored faceplate was his favorite. I didn't have him sign the silver faceplate, because I knew that if he did, I'd likely never play my Micro in public again due to me being afraid of the faceplate getting scratched up. In hindsight I would have had him sign all three faceplates, but honestly, I wasn't technically supposed to even be near Reggie at the time, so I made out rather well.

I offered him the DS that Miyamoto had just signed, but he refused, and in hindsight I'm quite thankful for that. I have numerous other items signed by Reggie, but I'll share those elsewhere, since this page is only about video game hardware.

Reggie did an incredible job signing these faceplates, they almost look like "Special Reggie Edition" Gameboy Micro plates rather than ones that were simply autographed. 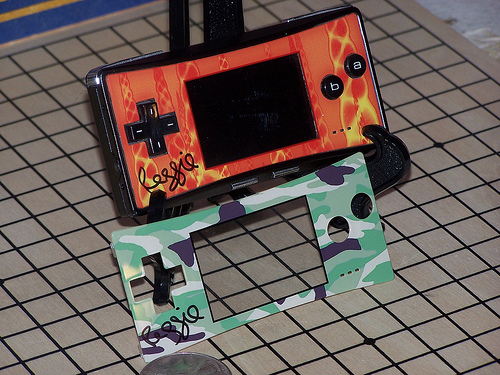 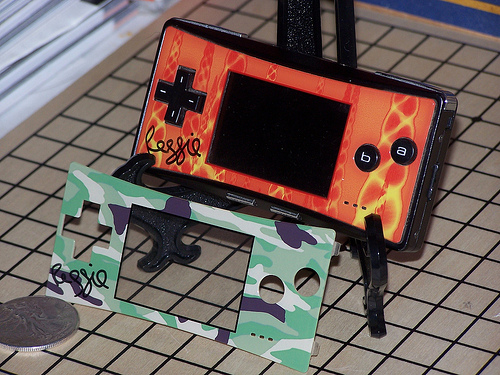 To submit feedback, please use the site guestbook or email the author at,

This work is the intellectual property of Super Train Station H and is registered and protected under US Copyright.
Use of it by third parties is bound by Copyright law and the terms defined in this site's Terms of Use Agreement.
Certian photos on this page are available under a Creative Commons license. See my Flickr page for details.
Thanks to PeteDorr for advice on lighting and displaying the sytems. Check him out his YouTube channel!